Classified Print  Add to favorites  Tell a friend  Number of times listing has been viewed: 102 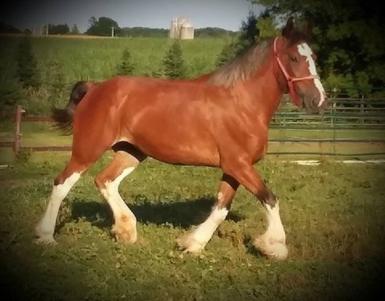 15 Jan
nelson294
Show Phone Number
04183020215
View seller's other ads
clyde mare with 4 whites. 6 years old. Sweet & willing. 17 - 17.1hh. My daughter bought her last year to breed to our gypsy stallion but last fall she slipped her foal at 3 months along. I hauled her into the vet & they checked her out & said nothing was wrong with her so this summer we tried breeding her back. Due to the huge difference in height our gypsy stallion has an extremely difficult time servicing her however she appeared to stop coming back in heat so we assumed he got the job done. When we had preg checks done tho we couldn't locate a fetus. My daughter just came home from college for & said instead of just letting her sit I should sell her. The man we bought her from said she is broke to drive. We personally don't drive or have the equipment so never done it. We've sat on her a few times & walked around a little bit but thats it. I don't think it will take much at all to get her going under saddle if someone wants her for a riding horse. She's very quiet & easy to handle. She LOVES on the other mares foals & tries to steal them as her own. We had her tested & she is PSSM1 n/n & tests EE,AA which meant by our gypsy stallion she would have been guaranteed to have a buckskin foal but my daughter said living 6 hrs away she doesn't have the time to deal with it anymore. I'm going to have her rechecked shortly just to be sure we didn't miss the fetus on her last ultrasound and also i'm sick
Price: $ 2,999.00 AUD
Listing ID: 90890