Classified Print  Add to favorites  Tell a friend  Number of times listing has been viewed: 317 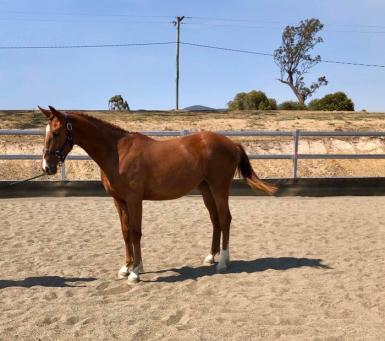 BZ Nervina is a stunning chestnut filly. BZ Nervina has three beautiful paces, with her four white socks she is sure to capture the eye in the dressage or show Arena.

Nervina sire MSJ Nemo who is in turn sired by Negro, who is also the sire of Valegro, ridden by Charlotte Dujardin who has won multiple gold medals.

MSJ Nemos granddam Fernia on his dams side is a full sister to Don Schufro. Don Schufro is the sire of Weihegold was was ridden by Isabell Werth also winning multiple gold and silver medals. MSJ Nemo has now been gelded so this is a limited opportunity to get these amazing bloodlines.

Nervina is out of BZ Roma who is by Regardez Moi who has represented Australia and is the most winning Grand Prix dressage stallion in Australian history with more than 40 Grand Prix wins.

Nervina s half brother BZ Qantas was recently sold for $15 000 and is showing massive potential under saddle.