Classified Print  Add to favorites  Tell a friend  Number of times listing has been viewed: 324 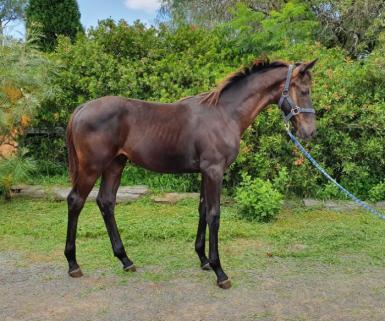 This colt has all the best breeding with world class Grand Prix dressage performance on both his sire and dam line, with horses with the similar genetics currently making up the majority of the Olympic and World Championship dressage competition and taking the medals. With breeding like this his destined to make it to the Olympics and his genetics also present an opportunity to make money by selling his services. The sire Drumming R is Heath Ryan’s new baby stallion. Drumming R is by De Niro who has himself had progeny who have sold for upwards of €900,000. The dam of Drumming R is Top of the Morning R who in the Auction of the Stars July 2019 sold for $72,000 plus GST! Top of the Morning R is by the super stallion Totilas. Totilas himself has done amazing things with World record scores at Olympics and World Championships. Totilas has had progeny that have sold for huge prices and his oldest progeny are just about to make waves on the Grand Prix (Check out the Black Magic show with Total Us and Toto Jr. https://youtu.be/GjGDFNRkw6g). On the dam line Ch Danseur is out of a Jive Magic (Jazz)/Regardez Moi (Rubinstein) mare. Jive Magic and Regardez Moi served as foundation stallions for many of Australia’s top dressage horses with their genetics making a huge impact on the horses we see on the Australian dressage circuit today. Jazz and Rubinstein are dynasty Grand Prix bloodlines with Jazz again topping the WBFSH for 2019. CH Danseur has sensational movement plus which you can see in the video. He has superb knee and hock action and floats effortlessly along. CH Danseur is a really really exciting colt for the future.