Auction Print      Number of times listing has been viewed: 1148 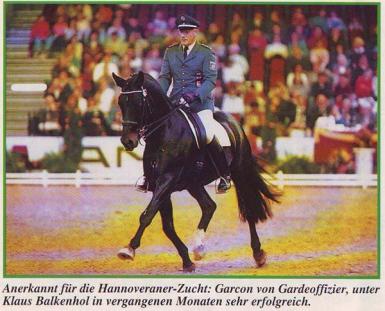 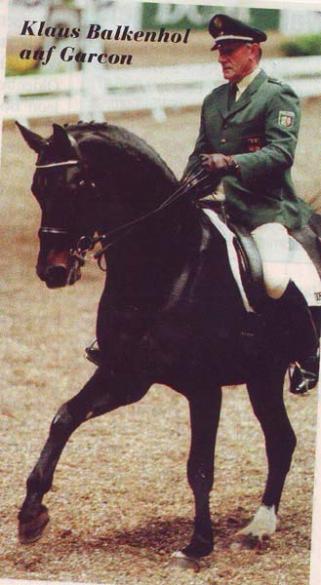 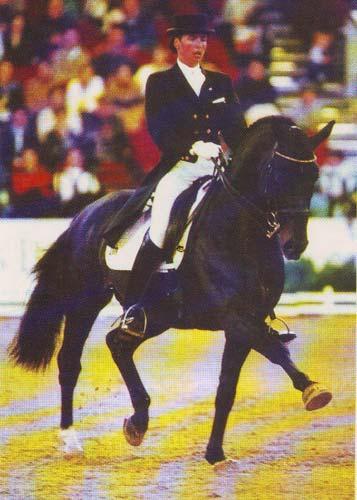 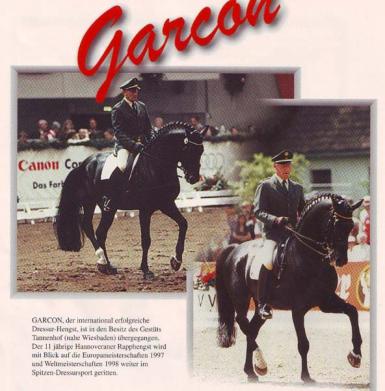 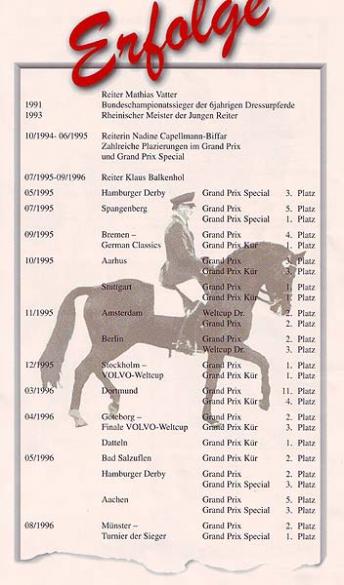 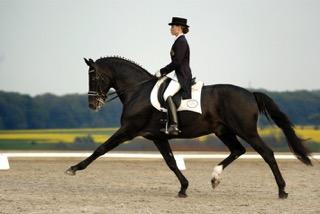 Name of Stallion: Tannenhof's Garcon (Formerley, Garcon) Year of birth: 1985 Year of death: 2014 (very rare semen) Country of birth: Germany Color: dark bay Gender: Stallion Studbook: Hannover Approved for: Hann, Hes, Oldenburger, SF, sBs, Bay 6 straws only of Frozen Semen donated by: Belcam Stud owned by Ulrich Klatte Successful bidder responsible for costs of breeding of mare and semen and shipping. Donated service is for use by successful bidder only- may not be sold or transferred. No LFG This Dressage Stallion is now Deceased and very rare Semen. Excellent temperament. Garçon was born in 1985 and bred by Michael Prange. The black stallion was by Gardeoffizier out of Doris (by Dominik xx x Eindruck II). As a youngster, Garçon was first competed in the riding horse tests in 1989 by Andrea Krings and then taken on by Matthias Vatter to Prix St Georges level between 1990 and 1994. Vatter and Garcon won the 1991 Bundeschampionate in Munich for 6-year olds. The black stallion moved to Nadine Capellmann's yard in 1994 and was first shown internationally at small tour level and at Grand Prix level in 1995. Renowned trainer Klaus Balkenhol took over the ride in the summer of 1995 and competed the stallion at national and international Grand Prix level. They took placings in Stuttgart, Amsterdam, Stockholm. They were third in the Kur to Music at the 1996 World Cup Finals in Gothenberg. German champion at 6, he was ridden at the highest level by Klaus Balkenhol . With the German rider, he has won numerous Grand Prix victories and notably took second place in the 1996 World Cup final in Gothenburg. In 1997 Garçon switched riders again and was competed by Dutch Ellen Bontje in Germany. Moving into Klaus Plönzke's ownership, Garçon got his sixth rider in Anja Plönzke in 1998. She competed him at national Grand Prix level from 1998 till 2000. Garçon was licensed as a breeding stallion for the Hanoverian society as a 10-year old in 1995 based on his show achievements. He was also approved for the Oldenburg, Westfalian, South German, SBS and Selle Français studbook. Garçon disappeared from the scene to resurface in 2004 under Belgian Young Rider Amandine Prevost, who competed the stallion for Belgium at international youth riders events in Duisburg, Neubeeren and Babenhausen. Garçon was an invaluable schoolmaster to Amandine Prevost. He was retired from competition at age 23 and stood up for stud until he was 24.
Listing ID: 80801 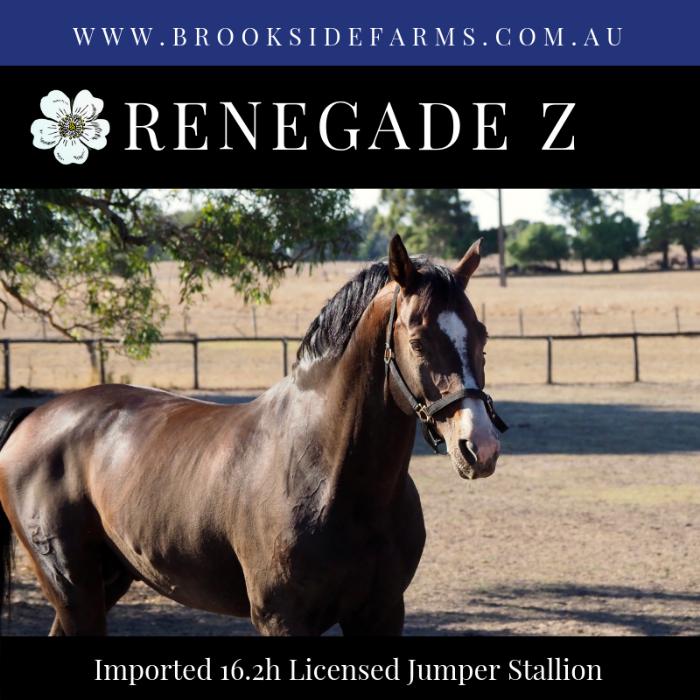