Auction Print      Number of times listing has been viewed: 981 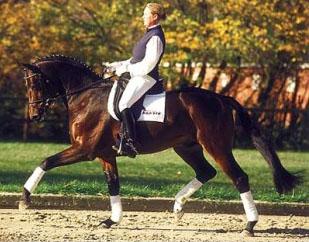 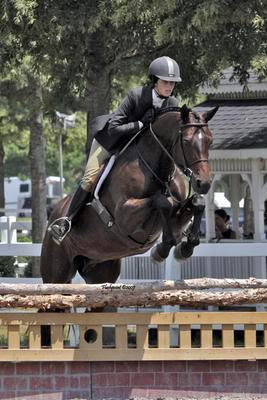 1996 dark bay 16.3-hand Oldenburg Approved for: Oldenburg, Hanoverian, Westphalian, Rheinlander Stallion Performance Test 1999, Neustadt-Dosse Overall score 132.4 Dressage score 127.28 Jumping score 128.42 AUCTION STARTING PRICE: $500 6 straws only of Frozen Semen donated by: Belcam Stud Ulrich Klatte (07) 55 430 125 Successful bidder responsible for costs of breeding of mare and semen and shipping. Donated service is for use by successful bidder only- may not be sold or transferred. No LFG This Dressage Stallion is no longer standing at stud and his semen is very rare. Ruiz Soler personifies the essence of the modern riding horse. He returned to Klein Roscharden from the stallion performance test in Neustadt/Dosse as the outstanding winner, receiving scores of 9 and 10 for rideability and jumping which proves his great double talent, combining three excellent basic paces with fascinating jumping qualities. No wonder with his ancestors: Rubinstein I and Argentinus have been top, elite German sport horse makers for years. Also noteworthy is the double influence by top sire and half Trakehner, Absatz, in the fourth generation. With Hessenstein/Trakehner and Lateran/Trakehner, this dam line also has plenty of East Prussian blood in earlier generations which practically guarantees a noble, consolidated inheritance. Although Ruiz Soler is sired by dressage stallion Rubinstein, his dam Larentina (by Argentinus x Leibnitz) provided a strong influx of show jumping talent into Ruiz' blood. Ruiz was Stallion Performance Test winner in Neustadt/Dosse scoring 9s and 10s on rideability and show jumping. Ruiz Soler has a full brother, Rubinstolz, who was licensed in 2000 in Baden Wurttemberg. Ruiz Soler has the same dam line as Absolute, a sire at the State Stud Celle, Kassander (private sire in Denmark), Marschall (State Stud in Schwaiganger) and Rico (State Stud Marbach). This dynasty has produced numerous athletes as well as auction horses. His entry into the world of sports has gone smoothly and so far he has won several riding horse tests as well as dressage horse tests in novice level. In 2000 he received the Main Premium for the excellent quality of his first foal crop.
Listing ID: 80804