Published on Tuesday, November 29, 2011 in Stallionzone

Sue Walker and Noble Monarch took out one of NSW’s top dressage awards at the NSW Dressage Championships held at Tamworth on September 9, 10, and 11. Sue and Noble Monarch won Dressage NSW Elementary Horse of the Year 2011! All registered horses in NSW are eligible to compete for this award and it is awarded for the best five performances, at that level, in the prior 12 months.

A partnership for just over 18 months, Sue and Noble Monarch have had some wonderful results during this time, including a number of wins at regional Championships at Novice, Elementary and Medium Levels.

Sue says he is a wonderful stallion with the most beautiful temperament, and very trainable.  Noble Monarch has been chosen to compete at both State and National Level Dressage for 2010 and 2011 whilst being trained and ridden by Sue Walker. To compete at these competitions, the horse and rider combination has to have three very high scores in the previous 12 months, and then only the top 30 horses per level are accepted.

Noble Monarch is currently competing at Medium Level Dressage and will commence 2012 at this level and move onto Advanced throughout the year.

Noble Monarch is a true example of the beauty and elegance of the Trakehner Warmblood. His pedigree boasts many International and Olympic Trakehner horses who have achieved outstanding success – Noble Monarch represents the attributes of the breed in Australia... Elegance, Beauty, Trainability.

Suellen and John Saals of Kingston Park Warmblood Stud are proud to have bred Noble Monarch. All credit goes to Sue Walker for her invaluable training and competing of this stallion. During 2010 and 2011 they have made a formidable pair in the Dressage arena.

Kingston Park Warmblood Stud are also looking forward to meeting their new imported pure ‘Premium Trakehner Filly, HerzAss’ when she arrives in Sydney on 14 December 2011. Imported from Austria and registered with the Trakehner Verband in Germany as Premium Foal, she will be included in the breeding program as well as eventually having a career in Dressage. Stay tuned for more on this gorgeous filly! 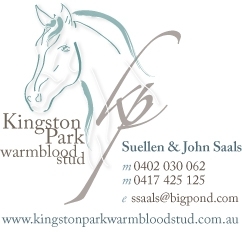